Sitting quietly outside the gaudy, rambunctious Eaton Centre is this unassuming plaque. 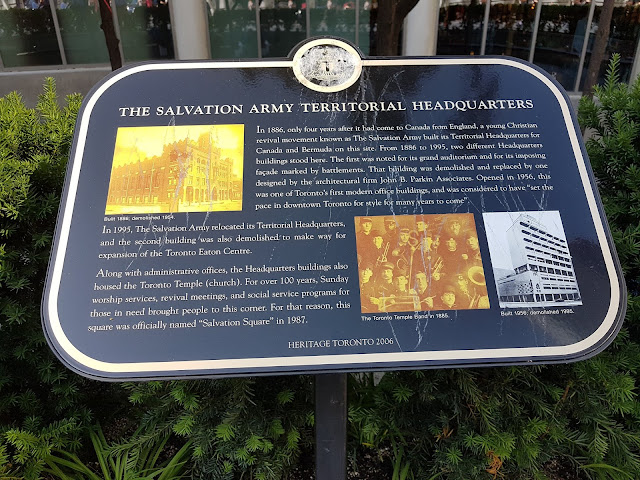 In 1886, only four years after it had come to Canada from England, a young Christian revival movement known as Salvation Army built its Territorial Headquarters for Canada and Bermuda on this site. From 1886 to 1995, two different Headquarters buildings stood here. The first was noted for its grand auditorium and for its imposing façade marked by battlements. That building was demolished and replaced by one designed by architectural firm John B. Parkin Associates. Opened in 1956, this was one of Toronto's first modern office buildings, and was considered to have 'set the pace in downtown Toronto for style for many years to come'. 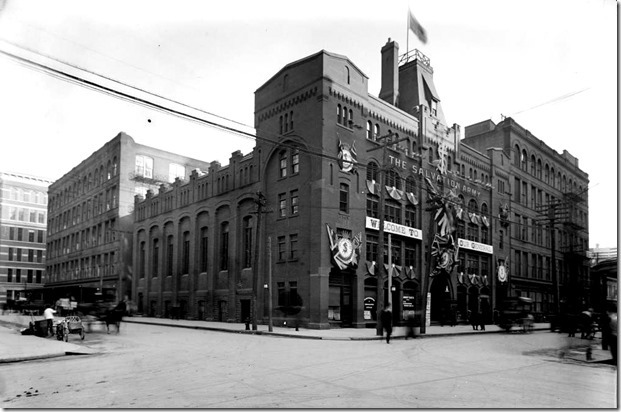 In 1995, The Salvation Army relocated its Territorial Headquarters, and the second building was also demolished to make way for expansion of the Toronto Eaton Centre.

Along with administrative offices, the Headquarters buildings also housed Toronto Temple (church). For over 100 years, Sunday worship services, revival meetings, and social service programs for those in need brought people to this corner. For that reason, this square was officially named "Salvation Square" in 1987.
Posted by Jackie McGuinness at 12:30 AM