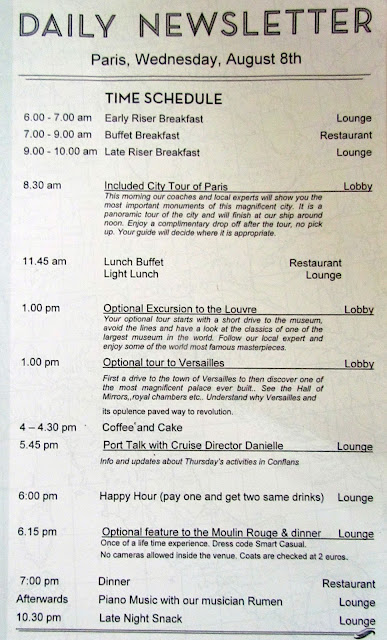 It was certainly a busy day with a Paris sightseeing tour and then the afternoon was spent at Versailles Palace.

We went back to the boat to get dressed up and left at 6:15 PM as we decided to take the optional tour of Moulin Rouge which includes dinner.


Created in 1889, the Moulin Rouge undertook a new challenge: to be proclaimed the festival of beautiful French dance and women ! It was immortalized by Toulouse-Lautrec. Their website is gorgeous.

The popularity of the Moulin Rouge increased due to the French Cancan created by Nini Pattes-en-l’Air. It was inspired by the Quadrille, invented in 1850; eight minutes of dance on a boisterous rhythm on Offenbach’s music. With the French Cancan, young women, like the laundresses of Montmartre, lifted their leg as well as their underskirts.This dance was sometimes considered indecent.


We were bused to the front door of the Moulin Rouge and were quickly seated. It is incredibly crowded with hardly any room between tables. Cameras are absolutely forbidden.
Our menu consisted of:
Festival of Norwegian smoked salmon, Tarama, Trout Roe and
Avruga, ...
Chicken Supreme, morel cream and fresh pasta OR Cabaret baked
salmon fillet, ...

And a chocolate pastry with the Moulin Rouge icon piped in red icing.
The food was served very quickly and efficiently while a duet played on stage.

I did find an amazing video that is exactly the show we saw!! This video is 80 minutes long! It also gives you a quick look behind the stage. Definitely watch it on a full screen.

The Moulin Rouge's new show, "Feerie", has been created by Doris Haug and Ruggero Angeletti, who, since 1961, have been the directors of the most famous shows in the world.

Choreographed by Bill Goodson, Feerie consists of : a troupe of 100 artists, including the 60 Doriss Girls that were recruited world-wide ; 1000 costumes of feathers, rhinestones and sequins, designed by Corrado Collabucci, and set up in the most famous Parisian workshops (for example, 500 pairs of custom-made shoes of the size 36 to 47, ...); sumptuous settings with shining colors and unique designs created by Gaetano Castelli and made by Italian artists; the best international and outstanding acts; and the expected return of the giant Aquarium.. all of that with music by Pierre Porte, using some 80 musicians and 60 members of the chorus.

"The Moulin Rouge today and yesterday, the Moulin Rouge forever"
The theatre lights switch off, the curtain is raised and the entire troupe appears on stage, under the admiring gaze of the audience who find themselves entering the Garden of the Moulin Rouge to discover the magical atmosphere of the place. A touch of nostalgia!

"Sandokan"
What kind of adventures can happen to a pirate whose boat is anchored in Indonesia? Dreams? A perfect woman's love? Once in the land, one meets priestesses, or a Gorgon in her temple surrounded by snakes, women jewels, tigresses...

Will Sandokan have the opportunity to offer his treasures to the lady of his dreams or will we be witnesses to a sacrifice of love?

"The Circus"
The circus comes to town with its band of clowns, Siamese twins, pierrots, acrobats, jugglers, weird wild animals and six miniature horses! A colorful scene with beautiful music which ends with the great parade of the Doriss Girls and Doriss Dancers.

"The Moulin Rouge from 1900 to ..."
The Moulin Rouge pays a tribute to Parisian women throughout the years: on the 14th of July, for the Liberation of Paris.. with Java or Boogie music. Time passes and leaves space for new generations of women, more beautiful and free than ever!

At the highlight of this tribute, the Doriss Girls dance the world famous French Cancan!

Posted by Jackie McGuinness at 3:32 PM