I seem to have Dublin, my birth city, on my mind this weekend. Perhaps because St. Patrick's Day is coming...or perhaps because I am feeling the need for a visit, it's been a while.

So I am posting some sky pictures I took on previous visits.
The Custom House (Irish: Teach an Chustaim)
18th century building in Dublin, Ireland which houses the Department of the Environment, Heritage and Local Government. It is located on the north bank of the River Liffey, on Custom House Quay between Butt Bridge and Talbot Memorial Bridge

It was designed by James Gandon to act as the new custom house for Dublin Port and was his first large scale commission. For his assistants Gandon chose Irish artists such as Meath stone-cutter Henry Darley, mason John Semple and carpenter Hugh Henry. Every available mason in Dublin was engaged in the work. When it was completed and opened for business on the 7th November 1791, it cost £200,000 to build – a huge sum at the time. The four facades of the building are decorated with coats-of-arms and ornamental sculptures (by Edward Smyth) representing Ireland's rivers. Another artist, Henry Banks, was responsible for the statue on the dome and other statues.

During the Irish Civil war from 1921-1922 the building was terribly affected as it was completely engulfed by fire for 5 days, resulting in a major loss of public records. Due to the intensity of the heat the dome melted and the stone was still cracking when it began cooling five months later. The Gandon's interior section was completely destroyed.

Although burned to a shell in 1921, this building has been masterfully restored and its bright Portland stone recently cleaned.


The roof line coats of arms are not that of King George III but of the Kingdom of Ireland with a Lion and a Unicorn either side of the Irish Harp.

A lion and a unicorn also stand on the sides of the shield on the coat of arms of Canada. 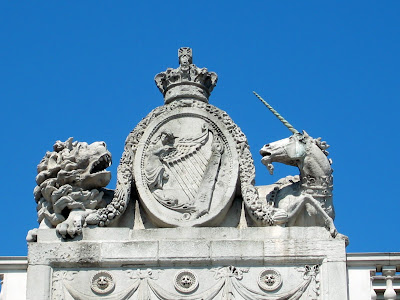 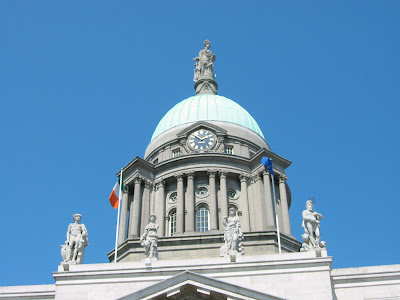 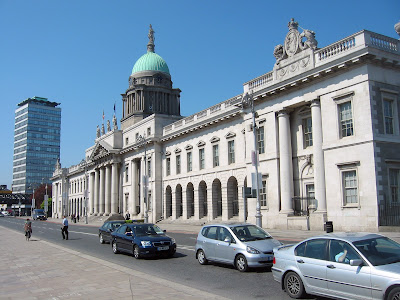 Posted by Jackie McGuinness at 11:00 AM